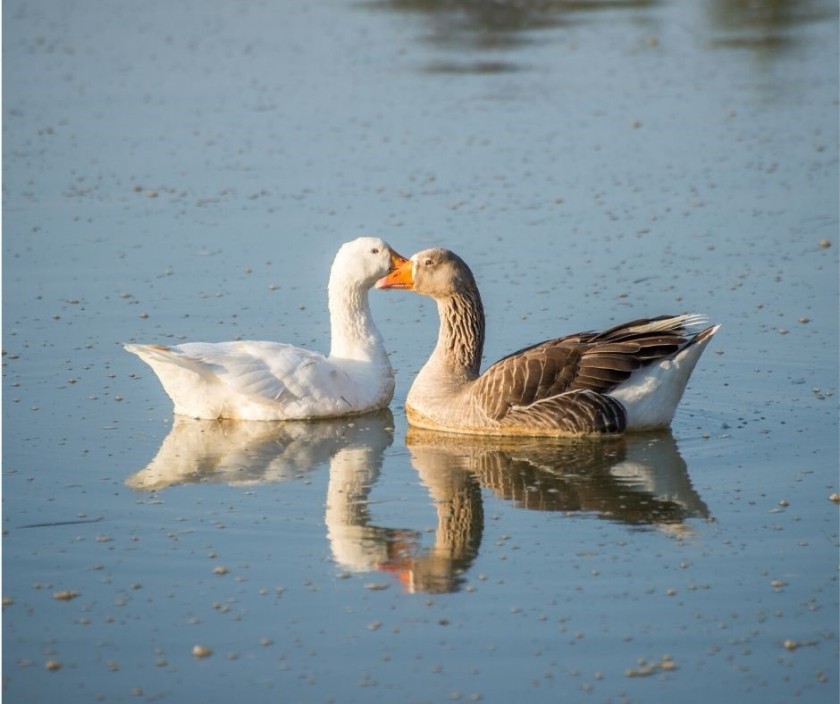 Do not conform any longer to the pattern of this world, but be transformed by the renewing of your mind. Then you will be able to test and approve what God’s will is—His good, pleasing and perfect will.” Romans 12:2

There is news from goose-land.  Well, for those of you who read regularly you know that I walk for exercise five or six times a week.  You also remember that I have different routes that I take and one of those leads me around the pond in the city park.  That is also known as goose-land. Today I chose to walk in the park.  Let me tell you with the warm temperatures and high humidity a walk in the park is no walk in the park.

I left the house this morning before sunrise trying to catch the coolest part of the day.  When I got to the park the sun was just starting to peek over the horizon.  I was all alone beside the ducks and the geese.  You will be glad to know the mama duck has managed to raise almost all of her ducklings.  You go, girl.  But then I noticed something different with the geese.

A couple of months ago I wrote and told you about an unusual yet beautiful thing with the geese.  A family of brown geese had adopted one of the white geese and one of the white geese, I named him Bubba, had taken up with the brown geese.  He was kinda like an Uncle Vinny…you know a protector and bouncer all rolled up in one.  He was good at it too.  He could let out a hiss that sent a clear message,  “You mess with my family and I will mess with you.”  It was all cool. Color and creed were all laid aside.

But then there was today.  I hadn’t walked in the park for a couple of weeks and while I was gone something happened.  The white goose that had been adopted left his brown family and joined the white geese.  But that’s not all.  Bubba, well Bubba had abandoned his brown family and had too rejoined the other group.  It is eerily familiar and seemingly sad.

I’m not sure what caused the change.  It could have been just time, it could have been peer pressure.  I just don’t know.  But I do know something that was unique and special was lost in the mix or rather unmixing. The baby now adult white goose seemed quite comfortable in his new environment.  But Bubba just wasn’t the same.  As I walked past the gaggle of geese there was one that stood out and I’m pretty sure it was Bubba.

This fellow who used to be so proud, his eyes filled with the fire of purpose, now stared with empty eyes.  There was no hiss, no sound of passion, no hint of protection.  Simply put, Bubba was now just one of the guys.  He was just another goose waddling around. What made him different was gone.  Bubba had lost his identity.

We need to realize that what happened to Bubba can easily happen to us as Jesus followers.  If it was peer pressure, if it was a cultural shift, what happened to him can and will happen to us.  That is why Paul wrote, “Do not conform any longer to the pattern of this world, but be transformed by the renewing of your mind. Then you will be able to test and approve what God’s will is—his good, pleasing and perfect will.”  If we are not careful the culture around us will pressure and push us to be just like them.

See, there were and are several white geese down at the park.  There was not a shortage of white geese but there was only one Bubba—only one who was willing to take a stand and protect those even different from himself.  The world needs some people who are willing to stand and be different.  The world needs some Jesus people who will live, act and love just like Him.  It’s not so we can be better than anybody.  It is so we can show them Someone who can help them be better—in fact, be made new.

If that is going to happen, we Jesus people have got to lay aside our differences, our prejudices, our soapboxes and just be like Him.  We have got to resist the pressure to become just another “goose in the gaggle.”  We have got to be light in a dark, damaged world.  Jesus said in Matthew 6:16 “In the same way, let your light shine before men, that they may see your good deeds and praise your Father in heaven.” Someone said, “These days, they are a changing” and the truth is, they are.  But we serve, we follow, the changeless one, Jesus the Christ.  And, if you are going to follow someone, that is the Someone to follow.  He is for you, He loves this world, and He is greater than any and all.  We can rest in Him because…He’s got this.