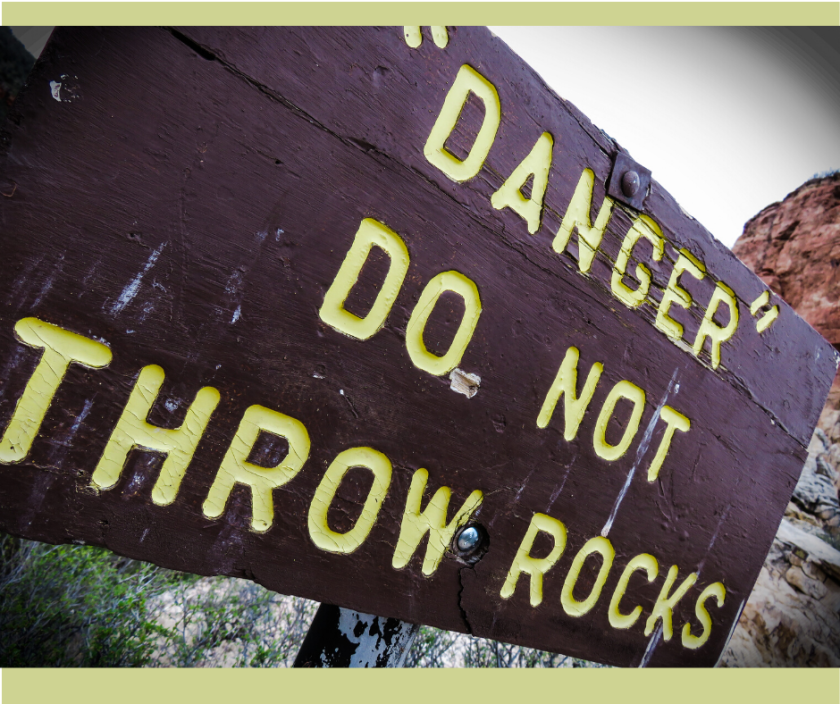 When they kept on questioning Him, He straightened up and said to them, “If any one of you is without sin, let him be the first to throw a stone at her.” John 8:7

One day I was with the family and I’m pretty sure we were at a laundromat.  Apparently the washing machine had broken down and we had to do the wash at the mat.  My daddy and I were out in the parking lot while mama was washing the clothes.  I was about nine and bored and that is not a good combination.  The parking lot was gravel and all those rocks just seemed to be saying, “Throw me.”  So, I obliged.

At first it was a little toss here and there but the more I threw, the more I wanted to throw.  First it was here and there but then I started taking aim.  Several things were lying along the edge of the parking lot and they made great targets but then I got an idea.  If hitting a can was good, imagine hitting a moving target.  So I started chucking the rocks in the direction of the road and at the cars passing by.  Bad idea.

Now, if you are going to chuck rocks at a car, every nine year old rock chucker knows you don’t just chuck your rock with obvious intention.  You ease into it. Well, I started easing into it and before long my rocks were landing dangerously close to cars passing by.  My Daddy thought it was kinda accidental and it garnered a “Dewayne, be careful to not hit the cars.”  He hadn’t caught onto my real plan to “ping a hub cap.”  Anyway, I kept chucking so he upped the warning.

“Dewayne, listen, don’t throw rocks at the cars.” He had finally caught on and I should have quit while I was ahead.  I finally got close enough so that we entered “Final Jeopardy.” “Question—what happens if you hit a car? Answer—I’m gonna give you a spanking.”  Yeah, well, you can probably guess where this is going.  I chucked a rock and hit a car going by and it was “Final Jeopardy.”  Daddy got mad, the driver got mad and I got in trouble.

Well, Daddy was able to talk to the driver and he promised him the “grapes of wrath” would fall when we got home.  As he drove off, daddy explained about the “grapes of wrath.” Translated, it meant I was gonna get a spanking when we got home and it wasn’t gonna be a little one.  So, as soon as we pulled into our driveway, I ran into the house and hid under the dining room table.  Soon, I heard Daddy’s voice, “Where are you, Dewayne?”  I felt like Adam and Eve in the garden after they had chucked rocks at God and decided to sin.  God was looking for them and they were hiding too.

And that’s where things get fuzzy.  I don’t remember the spanking which means I probably got grace instead.  It probably means that Daddy and I had a long talk about chucking rocks at cars and how that was not a good thing to do.  It must have worked because I don’t think I ever chucked another rock at a car…at least one that was moving. That day I learned about obedience and how it has a lot less consequences than disobedience.  I also learned about grace.  Grace is when you deserve a spanking but instead you get a talking.  But I also learned about rock chucking. I learned that it was ok to chuck rocks at things like stumps and cans, but it is not ok to chuck rocks at things like cars. When you do there are consequences…big ones.

Now, there’s another kind of rock chucking that I’m still learning about and that is chucking rocks at people. I’m not talking about waylaying someone with a stone but rather waylaying them with our judgmental acts and words. It’s what we do when we see someone fail and we decide to make ourselves feel better by knocking them down.

Jesus ran into this when some religious people found a woman sinning big.  They dragged her into the middle of a crowd and wanted to stone her.  They asked Jesus what He would do.  He told them that the person that had never sinned should chuck the first rock.  Well, slowly they all walked away because they had all messed up. “Where are your accusers?” Jesus asked the woman.  She replied that they had left…and indeed they had.

The only two left were her, the sinner and Him, the One who had never sinned.  He could have chucked rocks but instead He loved her and forgave her.  She deserved the rocks but He gave her grace.  I like that.  A lot. He dismissed her a smile and a word of “now don’t go on sinning” and the rocks stayed on the ground…right where they belong. So, I am grateful for grace…and you should be too.  If we have experienced grace we should extend some too. You see, rocks make great parking lots and driveways but are terrible weapons. They need to stay in the quarry or on the ground.  My daddy showed grace then and my Dearest Daddy shows it every day.  We should too.  However, it’s good to know when we are hiding under the dining room table and He calls, we can come out and sit in His lap and learn about the consequences of sin but also the wonders of grace.  So, come on out from your hiding place. We can rest in Him because, “He’s got this.”