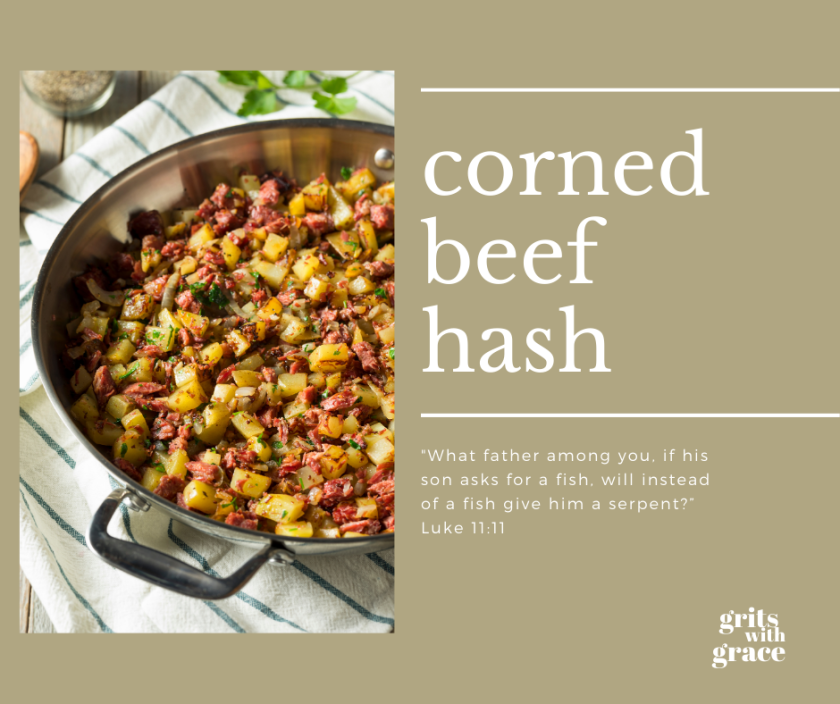 We were close friends from the start.  Although I was too young to remember, I think it must be true.  I think my very first word must have been…wait for it…”food”.  Then I think my first sentence was, “I’m hungry.”  I’m trying to say that food and I go way back and now I’m an expert on all things food.  Well, wait, maybe not all things.  You see I was raised on good, common food.  Our menu included things like meatloaf and egg salad sandwiches (aka Easter egg salad sandwiches).  There were some things that Mama cooked up, that to a kid, were kinda hard to swallow…no pun intended.  One of those things was tripe (aka cow’s stomach). We called it the “eternal meat” because it was like chewing rubber.  Take one big bite and two weeks later you swallowed.  Definitely not my favorite.

But, one of the best things that Mama cooked was something called corned beef hash. For that she would cook up some potatoes and then add some corned beef.  I’m not sure why they call it corned beef but I don’t think it has anything to do with corn.  At any rate…it was one of my favorites…well, sorta.  You see, there was a trick to this corned beef thing and Mama knew it and…I knew it.

In the world of Mama’s corned beef there were really two kinds—and they were worlds apart.  First there was fried corned beef hash and then there was boiled corned beef hash.  The fried hash was just as it sounds.  Mama would first fry up some home fried potatoes.  These, friend, are what potatoes were made for…crispy on the outside and tender on the inside.  And if they happened to be fried in lard—well, that was even better.  Then, she would add the corned beef and well, it was pretty much heaven.  I always liked mine smothered in ketchup.  But sometimes she would trick me.  I would ask what was for supper and she would say, “corned beef hash” and for me that had to mean fried because that was the only way it was supposed to be.   It’s kinda like grits-salt, pepper and butter is the only way grits can be grits.

But then, she had an ace up her sleeve.  Sometimes, she made boiled corned beef hash.  That involved boiling and (in my opinion) wasting a pot full of potatoes.  She boiled them till they were almost like mush.  Then she would add the corned beef to the pot and that was it and let me tell you all the ketchup in the world couldn’t redeem what water had done to what was meant to be fried.  I’m still not sure why she fried most of the time but still boiled others.  All I know I was always disappointed because when it comes to corned beef hash—fried always topped boiled.

With some things one way always tops another and that’s how it is with corned beef hash. And never is that truer than when it comes to God and religion.  People today get confused.  You see, God is God and religion is mankind’s frail attempt to reach God.  Try as you like, the only way to know God is by knowing His Son Jesus.  And that’s really cool because His way is a sure deal and man’s way is a sure failure.  Chances are you know someone who was or is totally disappointed in religion and I suppose some folks would speak of their disappointment in God.  But when we understand who He is and what He wants to do for us—that disappointment fades.

Like I said I was always disappointed when Mama boiled something that was clearly meant to be fried. And I’ve been around church world long enough to know that religion always disappoints but God never does.  I’m learning to trust Him and then believe Him even when that means things didn’t turn out the way I wanted or hoped.  His way is the better way.  If I don’t see it now…I will later.

One time Jesus was talking about prayer and said that a father would never give a snake to his son who asked for a piece of fish.  Nope…not gonna happen.  With God the fried things are always fried and even when we get boiled hash…well, we can trust that at the time, that is the best thing for us.  I like that sacred assurance just like I know, I know, that no matter what, “He’s got this.” Bro. Dewayne