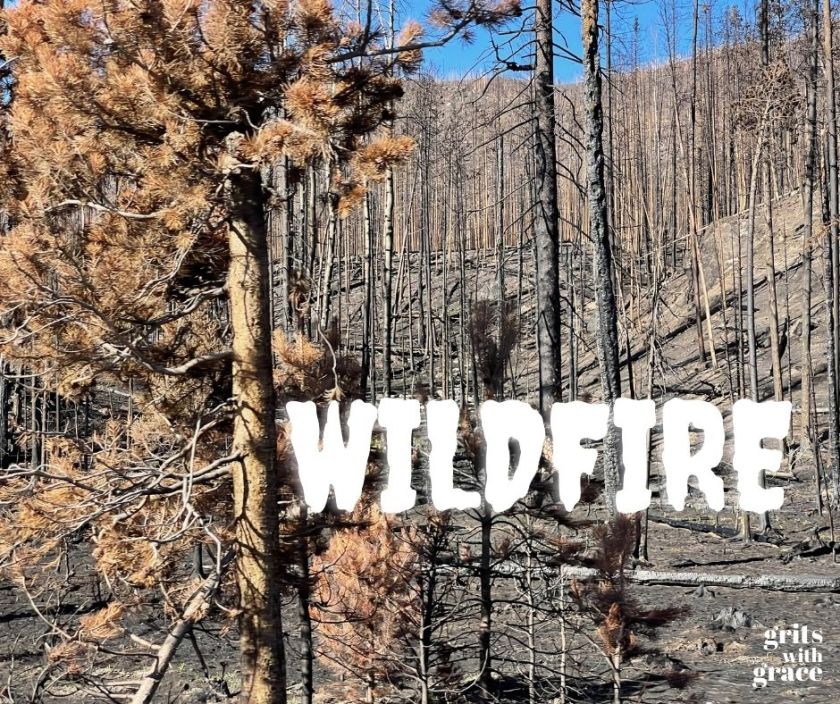 “A word spoken at the right time is like gold apples in silver settings.” Proverbs 25:11

Nothing could have prepared me.  When my wife Judy and I traveled out west we witnessed what we had only seen from afar on the news. The devastation of a wildfire.  It seems like everyday this time of year there is a story of yet another fire gone wild.  Sometimes, too often, they are in California but this one was in Colorado.  While we didn’t actually see the fire, we were engulfed in its affects.

As we drove on I-70, we traveled some of the very same places we went when we traveled with Amtrak going west on the California Zephyr.  It was interesting to see from the car what we had seen from the train.  Part of that route had been the victim of a wildfire a year or two before.  While much of the ground cover had recovered, many of the ravaged trees were still there reminding those who saw it of what had happened there.  At least there was a glimpse of life from the greenery that covered the ground.  It seemed to say, “There is hope.”

When we arrived on the west side of Rocky Mountain National Park we saw something totally different…something that said anything but hope.  I wasn’t sure exactly when but it was obvious a much more recent wildfire had consumed what it had taken nature hundreds and hundreds of years to grow.  Acres and acres, in fact, hundreds upon hundreds of acres had been burned to the point that only a black char remained.  As it turned out, in October of 2020, a fire had swept through a vast portion of the park.  Sadly, it appears to have been started, not by something, but someone.

The ranger said that the fire was driven by winds of hurricane force as it swept over the hills and through the valleys.  And yet, there was a miracle.  Right before it would have consumed the town of Grand Lake, a moisture laden fog moved in and saved the town.  For the lush forests, it was simply too late.  In a matter of 24 hours, that part of the park was horribly scarred for the foreseeable future.  The power of the wildfire that I had seen on the news suddenly became very real and personal.

It made me think.  It helped me remember.  You see James, the half-brother of Jesus, wrote in the Bible book that bears his same, about another kind of wildfire.  He was writing about the tongue and the damage it can cause when he said, “But a tiny spark can set a great forest on fire and among all the parts of the body, the tongue is a flame of fire.”  A.Flame.Of.Fire.  There is nothing else quite like the tongue.  A harsh word casually spoken, a criticism thoughtlessly thrown, a sarcastic comment—in a moment in time just as the fire consumed the beauty of nature so our words can scar the people-scape around us.

While a word thoughtlessly cast can destroy, a word of kindness can have the opposite affect.  Proverbs, a Book of Wisdom, in the Bible tells us, “A word spoken at the right time is like gold apples in silver settings.” What a strong contrast.  Our words can be like a fire that destroys or a gentle fog that holds the fire at bay—like the one that stopped the fire that October evening.

Destruction or delight, ravaging or restoring…the choice is ours.  Today, as we journey, let’s be “word aware”…understanding that we hold in our words the power to destroy or heal.  I know my past holds some painful memories of word abuse and for that reason I am very grateful for grace.  Today ask God to help you hold your tongue when needed and release it for good when the opportunity arises. Need a little help?  Not a problem.  Simply ask God and He will be there to help you make the right move…the right choice.  Rest assured…He’s got this. Bro. Dewayne