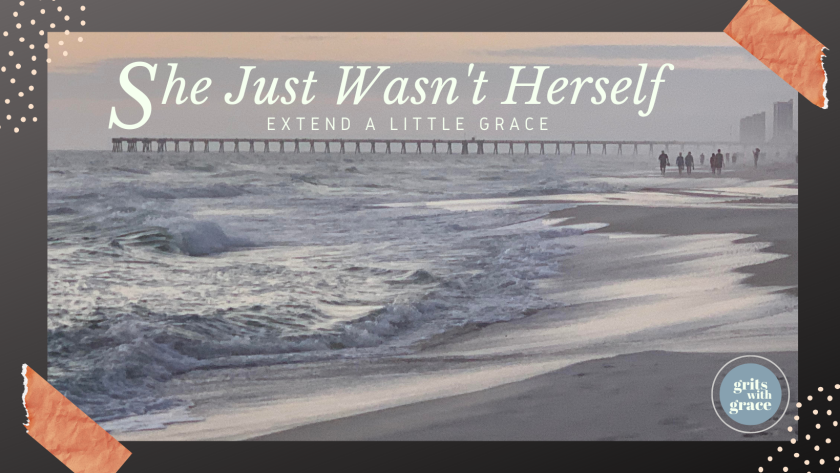 For from His fullness we have all received, grace upon grace.” John 1:16

She just wasn’t herself. We had been in Panama City Beach on Florida’s Gulf coast for several days.  We were blessed to have a condo right on the beach and five stories up.  The sights and sounds of the Gulf were just amazing.  We have been here many times over the years, but this year was a little different.  You see, I was raised over on the East Coast of Florida where the Atlantic Ocean lives.  There the water is grey and is in constant motion from the waves as they made their way to shore.  Usually, the Gulf is just different.  Here the water usually has just a slight chop and it is not uncommon for it to be a bluish-green color.  In a word…it is beautiful.  All of that is especially true in the winter months.  While the water is too cold for me, I never grow tired of its beauty.  But this year…well, it was different.

From the get-go, the water was much more boisterous.  The waves were constant and large…especially for the Gulf.  The sounds of water tumbling toward the shore filled the air.  The red flag flapping on the pole said, “Stay out of the water” but not many needed a flag…especially not today.  Today the turbulent water said it all—stay clear…stay on shore.  And while the air temperature was a pleasant 72 degrees, the grey clouds, matching the color of the water, echoed that message.  The bottom line was the Gulf just wasn’t herself.  The old girl was stirred up about something.  What, I didn’t know, but she wasn’t herself.

The strange thing is that even though she was not herself, even though she was something totally different, the beauty was still there.  There was something about the waves and the grey water that was still beautiful.  Perhaps it was the power and majesty of nature and knowing that it was all there by Divine design.  Perhaps it was knowing that sometime in the future I would be back…and so would she.  I knew that those three or four days didn’t dictate her permanent nature…it was just a moment in time.

At that moment, it occurred to me that what is true with the Gulf is true with us.  You see, we all have our days.  We all have times when we are just not ourselves and instead of calm and peaceful, instead of a thing of beauty, we act the opposite—turbulent and troubled—more “beastful” than beautiful.  And, like the Gulf, we and perhaps not even they, can explain why they are struggling that day, week, month or perhaps year.  And probably, most likely, you don’t need to tell them…they know it.  You are on the shore looking in, but they are in the midst of the waves…struggling.  And hopefully, soon the time will pass, and the calm and color will return to their lives.

What do you do when you bump into someone who is acting like a turbulent Gulf?  I think we should do what God does for us…extend a little grace.  Grace is defined as unmerited favor and that is what He extends to us and encourages us to extend to them.  Grace receivers should always be grace extenders.  I like the way John, the one in the Bible, puts it.  He says, “For from His fullness we have all received, grace upon grace.” Jesus, so full of grace, went about splashing grace on everyone He met—including us.  And it just seems right that we should do the same.  First, understanding God’s gracefulness to us, be full and then splash it on everyone we bump into—especially the ones who need it the most.

So, tomorrow we are heading home.  We will leave the Gulf and according to the forecast she will still be turbulent but not forever.  Calmer days are ahead for her and for me and for you.  And that person that is struggling right now, go ahead and splash a little grace on them.  It just might be the thing that brings a return of calm and beauty.  And whether you find yourself in the turbulence or on the shore looking on, remember this.  No matter if you need grace or need to extend some, He will be there.  He’s got this. Bro. Dewayne