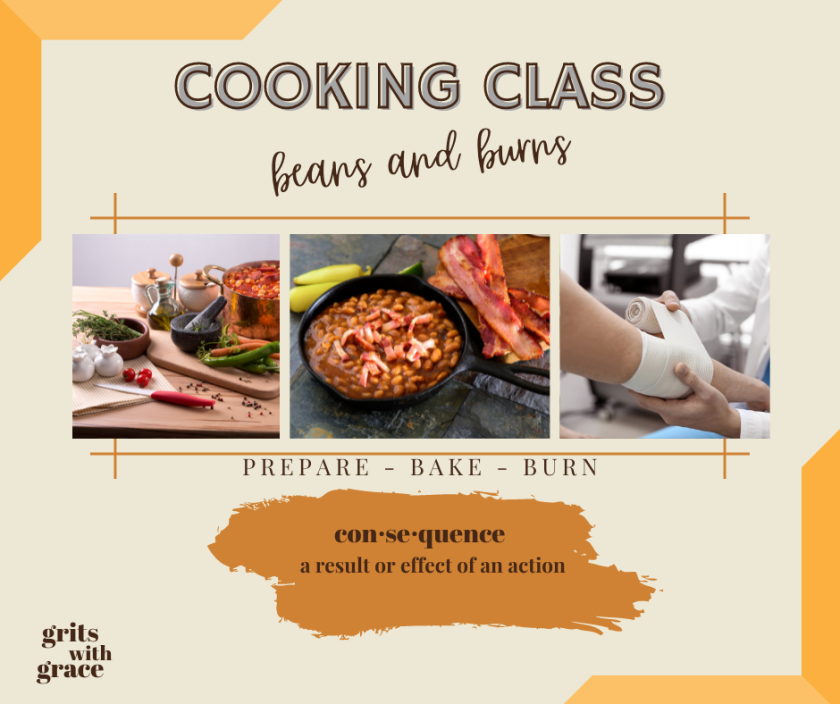 Don’t be misled—you cannot mock the justice of God. You will always harvest what you plant.” Galatians 6:7

It was the best of times. It was the worst of times.  Oh wait–that opening line has already been taken. Well, it was just over twelve years ago now, but I well remember the night. Judy was out of town, and I was at the church.  We were sponsoring a dinner for the football team.  I wanted to help but, well, it didn’t go to well.  It is a known fact that I can’t be trusted with a power tool of any sorts.  It just doesn’t go well.  Apparently, you can add all things kitchen to that list.

I love being a fixer.  When one of my grandkid’s toys would break, they would bring it to Papa—their fixer.  I love being the hero. And I love to help. It’s in my DNA. WelI, that night I volunteered to help the head cooker person get a large pan of baked beans out of the convection oven at church.  It was in one of those pans made of formed aluminum.  When I volunteered, I could see the concern in the head cooker person’s eyes. For an expert this was no deal…for a preacher who wasn’t allowed to use power tools—it was Death Valley.

“Dewayne”, she said, watch the bottom of the pan—it can collapse if you aren’t careful.”  She went on, “You might want to put a sheet pan under it for support.” Well, Mister “I -Know-It-All” said, “No deal, I can handle it.” So, I reached up, I lifted it and in a moment of time…a moment that will live in infinity…the pan collapsed, and my lower left arm was baptized in a tsunami of scalding, hot baked beans.  The pain was instantaneous, and it was intense. Can someone say “ouch?”

Well, I immediately used my other hand to wipe some of the beans off (not too smart since I burned that hand too) and ran to the sink and started running water over it.  The bottom line is I ended up with second degree burns, a working knowledge of how not to take beans out of the oven and several other good life lessons added to my repertoire of knowledge. You might say I have “bean” educated.”

Perhaps the first lesson is this.  No matter how well you do something the wrong way, it probably isn’t going to work out for your benefit.  When King David and his crew were moving the ark in the Old Testament, they decided to use a cart instead of doing it God’s way.  The result was the oxen stumbled and a man reached out to steady the ark and was instantly struck dead by God.  Now don’t blame God—the rule was you don’t touch the ark.  Period.  But when you do something in a wrong way you open yourself up to a whole bunch of circumstances.

Second, listen to the experts.  The head cooker person I was helping was a professional cook.  She knew the danger–I didn’t.  I was a he-man, bean toting pastor–that is until “I spilt the beans” (pun intended!) I thought I could handle it—and I could not. I’m not sure why we wrestle this around but isn’t it funny how God, the ultimate expert, offers us advice–and we tend to ignore it.  And the pain that it causes can rival or exceed second degree burns. Listen to God.  He knows best.

Finally, get ready for the lasting effects of the consequences.  I burned my arm on a Tuesday and it took days, lots of days, to even begin to feel normal. Oh, and did I mention that I didn’t go to the doctor because I was going to tough it out? You see, pride is a bad deal.  I guess I was embarrassed enough, and I just didn’t want to explain to the doctor about how unwise I was.  So, I just dealt with it.  Fortunately, I did bump into him later and he saw the bandage, checked it out, asked the inevitable questions, and gave me some awesome medicine for burns. It did heal and left only minimal scarring to gently remind me to listen before I act. It taught me that whatever you sow…you reap. It taught me that—every bad choice we make carries some sort of consequences.  Choose wisely, my son, choose wisely.

So, twelve years later, there is still a twinge of regret over that fateful Tuesday night.   I still shake my head and wonder how in the world I could do something so, so, stupid. Every once in a while, when we are having a dinner at church, I will say, “Hey, head cooker person, do you remember…” and before I can finish the sentence, we both nod knowingly.  I was afraid I was going to swear off bake beans forever but that that didn’t happen, but I will never look at a pan of beans the same way.  And I will forever have a greater respect for an oven set to 350 degrees.

As you journey along and you are faced with decisions and crossroads and someone suggests maybe going this way or that or doing it this way or that—take a moment, pause, and listen to their advice—especially if it involves baked beans.  And if that voice is a gentle whisper from the Whisperer, definitely stop and listen.  He will probably be helping you avoid some needless pain or letting you know you can rest in Him.  He will be whispering, “I’ve got this.” Bro. Dewayne