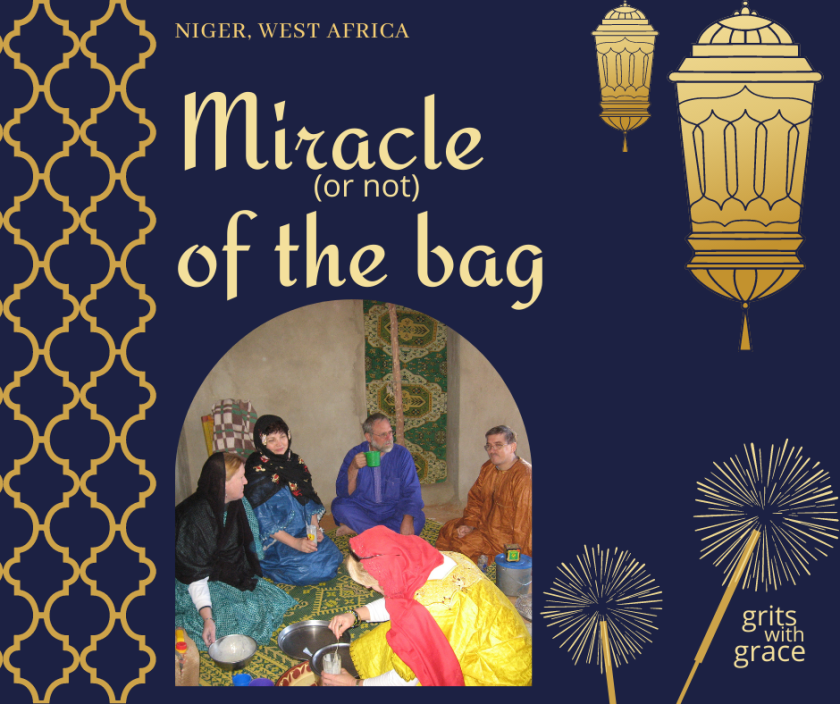 For nothing will be impossible with God.” Luke 1:37

There was no way.  We were once again on our way to West Africa.  This particular trip was a medical trip, and they were always the most fulfilling.  The needs in the Sub-Saharan region of West Africa are always mammoth.  Since water is always a problem that means food is too.  But second to that is the need for medical care.  Though health care is very reasonable compared to here in America…the bottom line is the people are just extremely poor and often the care they need is simply not available.  That is particularly true in the fringe desert regions of Niger.

This wasn’t a large team but is was a great one. We were all friends and several of us were Africa mission trip veterans.  For one in particular, this was her first trip and she handled it like a real trooper. On the morning we were to fly out, Judy and I went by to pick up one of our team team members named Rhoda (her name has been changed to protect the innocent). She attended our church and is a good friend of ours.  Rhoda has one of the most merciful and loving hearts of anyone I know.  If she has any capacity to help…she will.  Now we had had a couple of team meetings to go over the general expectations including customs, the number of bags you could carry, and very specifically, the weight allowance for each bag…which is fifty pounds.  Not fifty-two or fifty-one—fifty pounds.

When we arrived at Rhoda’s house, the air was electric with excitement.  Since I was the only guy from Harrisburg, I was quickly assigned the role of “pack horse.”  In other words—I got to carry the luggage to the car and load it.  Well, I went into Rhoda’s house and picked up the first bag.  I’ve done this enough that I can tell just about how much a bag weighs.  This one was just about on the money.  I went to the car and chucked it in the trunk.  I went back to get bag number two and as I went to get it—it seemed to be nailed to the floor.  With some effort, however, I was able to lift it off the floor—barely.

It was about that time that Rhoda walked into the room.  I asked her, “Rhoda, did you weigh this bag?  It feels a “little” heavy” (I was being extremely generous.)  She assured me that the bag was ok and so with some grunting and groaning, I kinda lifted and kinda slid the bag out the door, down the sidewalk and to the car.  Again, with considerable effort I managed to hoist the bag into the trunk.  All this while I’m going, “Man, this bag feels heavy…but hey…she said…” So, with the luggage on board and people seat-belted in, off we went to the airport where we met our final team member. When we arrived, we got one of those carts to help with the luggage.  We needed it.

Again, with considerable effort, I soon had the bags on the cart, and we headed inside to get checked in.  Judy and I went first.  We checked our luggage—fifty pounds each thank you—got our boarding passes and we were set.  Rhoda was next.  Her first bag was right at fifty pounds.  Go, Rhoda, Go.  I lifted the suspicious bag on the scale and watch with amazement (I think that is the right word) as the scale zinged up toward the sky and stopped at…sixty-five pounds…fifteen pounds over the limit.  Well, you can probably imagine my expression and explanation.  “Rhoda” I said, “what in the world?  I thought you said the bag was ok.”  “Well, pastor,” merciful Rhoda explained, “I was praying for a miracle.”

I don’t remember if we laughed, cried, or both but two things were sure.  First this was one miracle that God chose not to give us. Second, the clerk wasn’t a fan of grace—at least not fifteen pounds worth, anyway.  We took the bag off the scale and placed it on the floor to lighten it up.  Fortunately, some friends had hung around and they were going to be able to help us with the excess stuff.  And here is the picture of Rhoda’s beautiful heart. People had donated and she had gone to Bath and Body and bought those West African ladies… bottles and bottles and tubes and tubes …of all kinds of lotions and creams.  She knew they needed it for their dried-out desert skin and wanted to bless them.

Well, we had to remove fifteen pounds of Bath and Body and leave it with our friends.  But don’t worry—there were still fifty pounds of blessings left.  Almost the entire bag wasn’t for Rhoda—it was for her new friends in West Africa.  And do you know what?  The whole trip was just one big blessing.  We were able to provide free medical care to so many people and shared stories from the Bible with many others.  When it was all said and done—we were blessed and humbled and God was made big.  We didn’t get the miracle of the bag with the Bath and Body items, but we did get the miracle of changed hearts—ours.

The Bible tells us that nothing is impossible with God and I believe that to my core.  That doesn’t mean that we always get exactly what we want or the way we want it.  It does mean that in the end—it will all work out.  I think by and large that is one of the lessons we have learned through this COVID hot mess.  We have learned, or are learning, that if we will just leave it to Him…He will handle it, in His way and His time. Always, always—He’s got this.  Bro. Dewayne