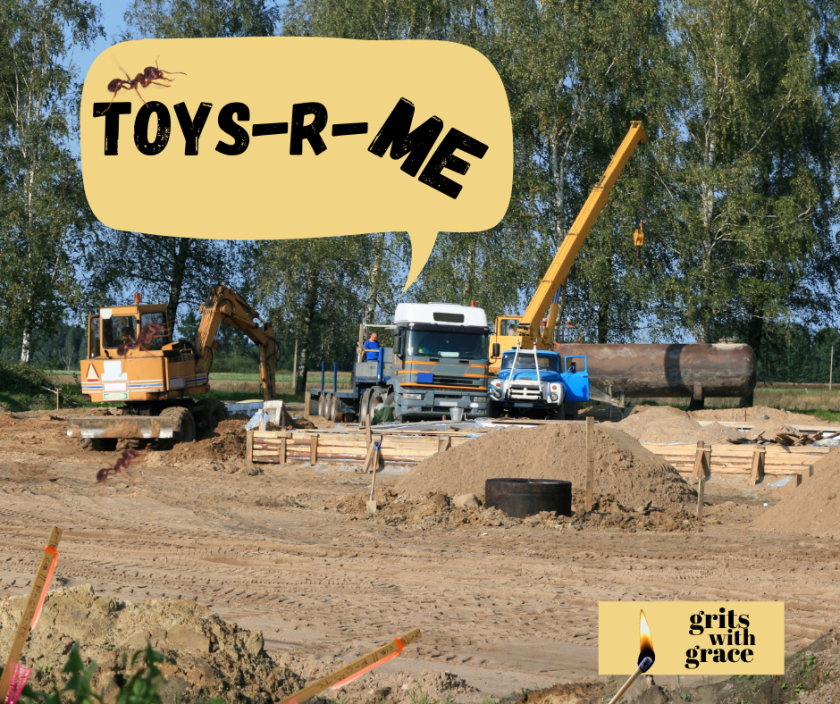 Not that I am speaking of being in need, for I have learned in whatever situation I am to be content.” Philippians 4:11

You just had to look around.  When I was growing up, somewhere and sometime between January and December, toys from my birthday and Christmas, slowly disappeared. I know some kids take extremely good care of the toys.  I had a friend once who took me down in his parent’s basement and there on the shelves were toys from when he was a small boy…all in perfect condition. They looked new though they were fifty years old.  Well, my toys just didn’t fair that well.  I don’t think I was overly harsh with them, but I was adventurous, and I did enjoy taking things apart.

Then the question becomes, “What do you do when the toys from the store are scarcer than hen’s teeth?  The answer is, “you get creative.”  I am thinking how many times I wandered over to one of the building sites across the street from my house and “borrowed” a couple of the surveyor sticks they had put out.  The shorter wedge cut ones made great rubber band guns and the thinner, taller ones made awesome “dirt clod” launchers.  The technique was simple…you simply stuck the end of the stick in the dirt and gave it a swift kick.  Instantly, a dirt clod was on its way to either a target or the kid down the street.  Boy, was that fun though looking back I’m sure the surveyor guys didn’t appreciate their sticks disappearing.

Sometimes, a new toy was just laying around.  It was the age of hula hoops and they made great “ant bombers.”  All you had to do was check and make sure your sister wasn’t watching, find a way to cut the hula hoop in half, get some matches and you were all set.  Then you would light the one end of the hula hoop which would begin to burn and melt.  As the plastic melted, it dripped to the ground sizzling and burning…the perfect red ant bomber.  I must confess a lot of good ants lost their lives that way but don’t worry.  You see sometimes they got me with their stingers before I got them with my firebombs.  Boy, that fun too.

Then, of course, you could make your very own train.  There was always a length of chain laying around the yard and there was always plenty of good, ole Florida sand.  All you had to do was drag that chain behind you and as you did the sand got pushed aside and the chain left a track in the sand. Round and round and up and down we would go leaving tracks everywhere. I can’t tell you how many times and how many hours we played making “train tracks.”

If all else failed, you could sneak into “Daddy’s tool shed.” It was attached to the house and honestly it was more of a junk shed than a tool shed but there was cool stuff laying around everywhere.  I remember Daddy had a bunch of one-pound cans of either freon or something like that.  It attached to a contraption that had a trigger.  It was made to spray liquids from a small glass container that was attached.  I discovered if you mashed that trigger the freon coming out would instantly make frost—freezing whatever it landed on.  It was amazing.  So, I found out that if you got tired of “fire-bombing” the ants, you could freeze them.  Now, don’t call the animal rights people…it was just part of growing up.

I could keep going but you can probably get the idea that there was plenty to do around the old homestead…and it really was…fun.  Back in those days television, especially during the day or early afternoon, consisted of soap operas or game shows…neither of which was exciting for a young boy.  So, I could learn to like them…not…or get creative.  I could have sat around and complained because I didn’t have what other kids had…or get creative.  Well, I chose to get creative…and I am glad I did.  Some of my best memories were out in the backyard just figuring out how to have a little fun.

So, how about you?  Do you find yourself discontented and bored with life?  Do you find yourself bemoaning what others have and what you don’t?  Can I suggest that you look “in your backyard” and see what might be there?  It might be an evening drive with the family.  It might be sitting under the tree having some tea or coffee just sittin’ and listenin’. It might be playing with the kids or waving at the cars going by.  Whatever, you might just find some unexpected pleasure…you might find a little peace…you might find a little contentment.  My friend Paul from the New Testament said he had learned to be content wherever and whatever he was doing.  I think that is something all of us need to learn.  Need a little help?  I know I do.  That’s when my Dearest Daddy often shows up just to let me know that He loves me and that no matter what, “He’s got this.”  Bro. Dewayne