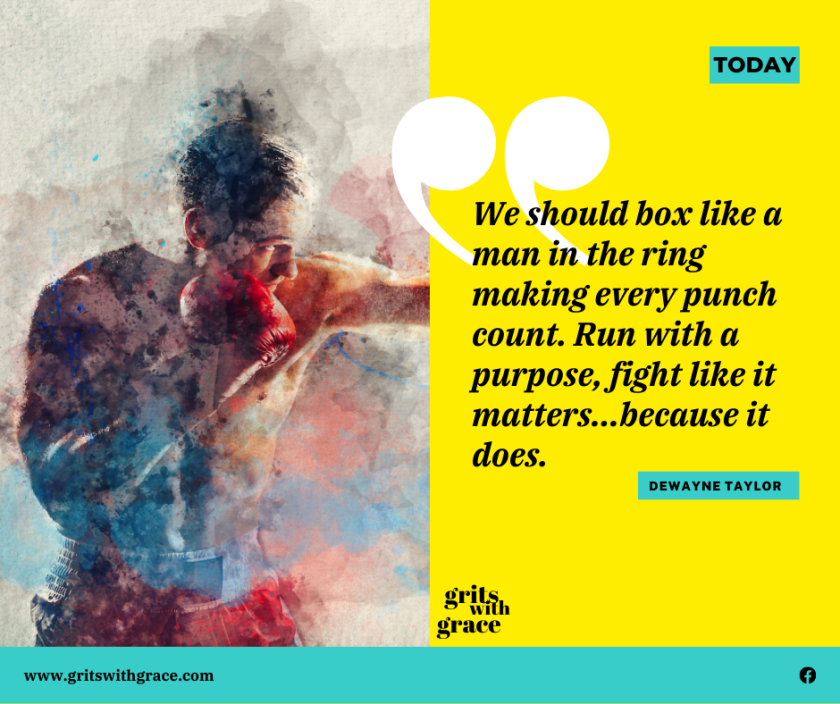 So I run with purpose in every step. I am not just shadowboxing.” 1 Corinthians 9:26

It was a whale of a deal—I think.  Three or four months ago my wife Judy and I were at HomeGoods.  She was shopping and I was sitting.  HomeGoods is a great store if you are looking for things for your house.  After checking my email and winning several hands of Solitaire, I decided to at least look around.  If you know anything about me you know there is a word that draws me like iron to a magnet, like a moth drawn to the flame, like water seeks lower ground—well, you get the idea.  And what is that word? CLEARANCE.

Different stores use different colors of signs announcing their clearance but I can spot any of them a mile away.  That particular night it was in a pretty obvious place, so I decided to check out the clearance aisle.  Now I need to be candid and let you know I see clearance stuff like I see Dairy Queen.  You see there is nothing I need at Dairy Queen, but DQ isn’t about needing it is about wanting.  I want ice cream…I don’t need ice cream.  Yes, I know it feels like a need, but it isn’t. Ice cream isn’t like air…we can live without it…I think. Anyway, when it comes to the clearance aisle it isn’t about needing it—it is about being a good deal.  Who can pass up something that is like 90% off?  Well, apparently, I can’t.

I wandered back to the clearance aisle and started poking around.  Nothing really caught my eye until right before I was about to walk away.  There was a flat box about fifteen inches square and it looked intriguing. Something was stacked on top of it which is probably why it was still there.  On the cover it showed a round circle with about 25 red balls sitting in small indentions.  It was beautiful…I think.  It was imported from Italy and made of beautiful, and I am not exaggerating, alabaster. It felt expensive, it looked expensive, and the original price was rather pricey.  It was marked $39.99.  Nice.

So, I looked around on the box and found the clearance price.  It was…get ready…three dollars and ninety-nine cents.  “What?” I said.  “Can it be?”  I said.  “Ninety percent off?” I said.  I mean I was amazed.  I couldn’t wait to show it to Judy.  I covered it back up and went to find her.  She was already in line, but I pulled her out to show her my prize.  When we got to the aisle, I showed it to her.  She was impressed and then she popped the question, “What is it?”  I told her I wasn’t sure, but I thought it was some sort of game.  There were no rules and no indications that’s what it was but hey, it was $3.99. We bought it.

We proudly set it up first on a table and then in our bay window.  I checked the internet but couldn’t find any information on the item.  I did find the company and they were sellers of fine alabaster but our treasure remained a mystery.  Enter the grandkids.  Judy made the mistake of showing this treasure to Will, one of our grandsons. She explained it was sorta like checkers (really?) and you would jump the balls like you do in checkers.  However, since the “board” was round there were logistical problems.  So, they started to “play” and then he popped the question.  He asked, “How do you win?”  And Judy said, “I don’t know.”

I thought that was great because so often in life we play the game and have no idea how to win.  And, truth be known, it affects all kinds of areas in our life.  How do you win in your career? How do you win in your marriage? How do you win in choosing your potential mate? How do you win with church? With Jesus?  You see, without knowing how to win you are sure to either get bored or get lost.  As much as I believe there is joy in the journey, I also know that there has to be goal, a measuring stick, a finish line.  Success needs to be measured.  If it isn’t you might find yourself stuck in a rut and as someone said, “a rut is a grave with the ends knocked out.”  So, what are we to do?

It seems to me that we should approach life with a goal—what do I want to see happen today?  Regardless of the arena, try and define what would be a win for that day.  And the best part?  You can start stringing those days together and before long you have a life of wins.  Now when you are defining a win, I believe you should set the definition in line with an authority, and I can think of no better authority than the Word of God. Even if you aren’t a God-follower you will find that the Bible is a Book worth reading, knowing, and following.  Go ahead and give it a read.  And if you are a God-follower, well, you probably already knew that—we just need to do it.

Paul, one of the writers of a chunk of the New Testament said that we should run with a purpose and not be like a shadow boxer.  We shouldn’t run like Forest Gump, aimlessly, but rather like Jesse Owens.  We should box like a man in the ring making every punch count.  Run with a purpose, fight like it matters…because it does.  Anyway, Judy and I are going to keep the game even though we don’t know how to play or win.  But tomorrow, I think I’ll wakeup and have a chat with my Dearest Daddy, my Trainer, my Coach and get His opinion on how to win in life. After all, He never loses, and He’s always got this.  Bro. Dewayne