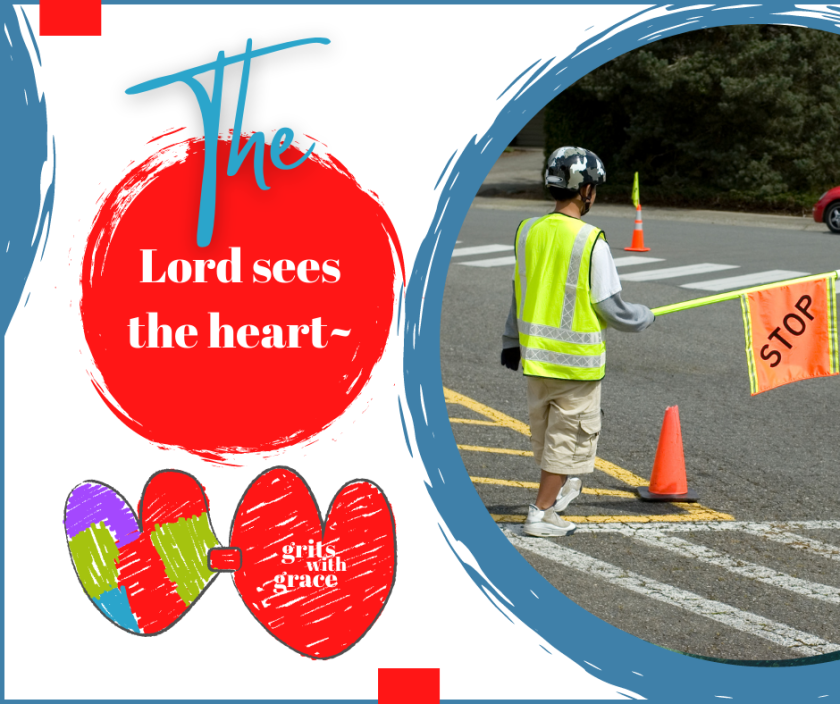 But the Lord said to Samuel, “Do not look at his appearance or his stature because I have rejected him. Humans do not see what the Lord sees, for humans see what is visible, but the Lord sees the heart.” 1 Samuel 16:7

It was a dream come true.  Growing up when I did was a blast.  I was born in 1954 (and yes, that was a long time ago) and things were just different.  Life was slower, people mattered more, things mattered less, and respect was a big deal.  I was raised to call people older than me, sir and ma’am.  It’s kinda humorous, but now I am the senior adult and I still call everybody and their brother, “sir.”  It was just ingrained in me from my earliest memories.

Back in those days, when you were in the sixth grade you were the king of the mountain.  You see in Florida in the early sixties elementary school went from first thru sixth grade.  There was no kindergarten.  Part of being the king of the mountain was the prospect of being selected to be a “patrol boy.”  Now, the first thing you need to know is the term “patrol boy” was a term of respect.  Today I think they still have crossing guards but back then…patrol boys were the state police of the day.  They had a belt that went around their waist and over their shoulder and of course, the flag.  It was a two-piece design that was about five foot long when put together.  Oh, I almost forgot.  They had a safety helmet too.  They definitely looked the part.

At the end of each school day, these brave traffic warriors would be dismissed from class a little early to go and man their assigned post. They would put on their belt and helmet, grab their flag, and head out for duty.  Now this was the real deal.  A teacher or aide didn’t accompany them.  The lives of their peers were in their hands—and they were granted authority to stop traffic.  Again, it was an honor and a dream to get that belt, helmet, and flag.  The selection process was done at the end of the school year of our fifth grade.  I’m not sure what the criteria was, but I do know not everyone got selected.

Ok, let’s be honest.  I wanted…I really wanted to be a patrol boy.  It was like I was born for it.  It was my destiny.  I could tell you that I wanted to help save lives.  I could tell you that the safety of every kid who crossed at my post was what drove me but that wouldn’t be true.  No, I’m afraid it wasn’t quite that noble.  I’m afraid it had nothing to do with safety…it had to do with…the belt, the helmet, and the flag.  Now don’t laugh, it was a big deal. The uniform has led a lot of guys to sign up for the Marines.  I was no different.  I wanted people to look at me and say, “There goes a patrol boy.  Leader of peers and a hero to boot.”

Well, it happened.  I was selected and honestly, it was just about everything I thought it was going to be—at least through my eyes.  No one ever called me a hero, nor did I outright save anyone’s life, but there was something about the way it made me…feel. Looking back, I think there is a word for it…pride.  You know there is a good pride…the kind that lets you know you did your best.  There is also the kind that says, “I’’m a patrol boy and you’re not.”  It’s closely related to the kind that says, “I have power and you don’t. You have to listen to me…obey me.”  Bummer.

As far as I know, at least from the outside, I did a pretty good job.  I received and proudly wore my little pin, which I got to keep at the end of the year that marked my service.  No one got ran over on my watch and I think I only got in trouble once.  That happened when one of my fellow patrol boys, a friend no less, made me mad and I whacked him with my flag.  It certainly wasn’t very hero like and trust me it wasn’t as pretty.  Something on the inside—that should have stayed on the inside—oozed out. I realize now that all of us have a tendency to play that game—pretty good on the outside and pretty dingy on the inside.  Someone once said you can fool some of the people some of the time, but you can’t fool all the people all of the time.

There should be another saying that says, “You can’t fool God any of the time.”  You see, God’s got this “vision thing” that allows Him to see right past the skin and right into our heart.  He sees our real thoughts, our real motives, our real selves.  It’s been kind of a “go to” verse for me recently but here’s what it says, “The Lord said to Samuel, “Do not look at Eliab’s appearance or stature because I have rejected him. Humans do not see what the Lord sees, for humans see what is visible, but the Lord sees the heart.” Wow…that is one scary thought.  God sees what matters.  We need to remember that.

Well, I enjoyed my year as a patrol boy.  The next year I went to junior high and went from the top of the heap to the bottom.  In fact, now that I think about there were a couple of guys who did their best to make junior high hard for me.  Today we call it bullying.  I wonder if it was payback for some misused authority.  Hmmmm.  What goes around…comes around.  Anyway, I’m glad I don’t have just a “patrol boy” watching over me.  Nope, I have the King of Kings and that’s pretty awesome!  I don’t have a thing to worry about because “He’s got this.” Bro. Dewayne