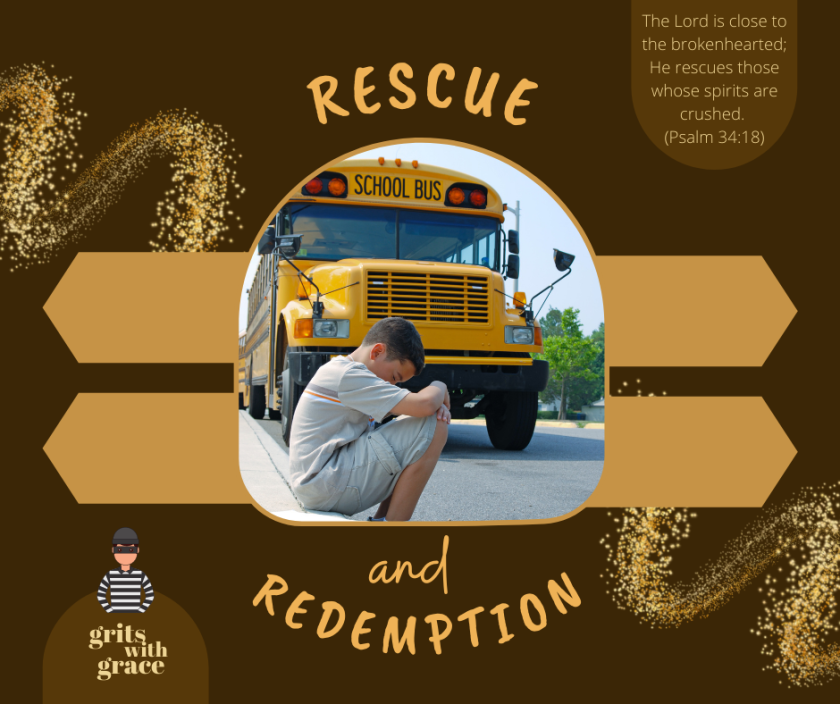 The Lord is close to the brokenhearted; He rescues those whose spirits are crushed.” (Psalm 34:18)

Tears streamed down my face as I raced after the car.  So many childhood memories are lost through the fog of time.  Depending on the memory…that can be good or bad.  A tragedy, a broken heart, a traumatic event, are all best left in the fog.  Others, though, need to be remembered.  And then, there are those that are both and this story is one of those.

It all started one day in elementary school.  It had to be the third grade.  The teacher had given us an assignment and to emphasize the importance, she said that if we came to school the next day without it…there would be consequences.  I don’t know what those were, but it probably involved a trip to see the principal or being fed to the sharks.  At any rate, it worked.  I was terrified.

Well, somehow, some way, it happened.  I got on the bus, got to school, and got to class.  Shortly after we said the pledge to the flag, sang our patriotic song for the day and then recited the Lord’s Prayer (yes, we really did that), she called for the assignment. Just about then, the Lord’s Prayer took on a new meaning.  I was genuinely scared…to death.  Well, in a moment of grace, she allowed this repentant sinner to go to the office and call my Momma and Momma came to the rescue. We agreed that I would meet her in the circular drive…where the buses dropped us off each morning. Since it was going to be a few minutes, I went back to class.

A little later, the teacher let me go and meet Momma.  I got to the drive just in time to see the back of our car leaving the driveway.  Either I was later, or she was early—either way I was in deep trouble. So, I did what any insecure, deep weeds third grader did back in the early sixties—I burst into tears and started chasing the car.  As they drove off, I remember running as fast as I could, crying out, “Momma, Momma.” Somehow, some way the brake lights came on and the car pulled over.  It turned out my brother was driving, and Momma was in the front passenger seat.

When I got to the car, Momma opened the door and I fell into her waiting arms.  Now this may seem a little dramatic and traumatic to some of you but then you didn’t have Mrs. Wilson for a third-grade teacher. There was not a sermon about how I shouldn’t have forgotten the paper—though that would have been appropriate. There was not a chastening—though I deserved that too.  There was only compassion for a young boy who thought for sure his world was about to end.  There was only love.

Well, first it turned out, she had already dropped the assignment off at the office.  Second, right or wrong, I just couldn’t go back to class, and I asked if I could just go home—and she agreed.  Apparently at the moment it was the right thing to do. Honestly, I was a mess and embarrassed that I was a mess.  The story ends with another chance.  The office must have sent the assignment to Mrs. Wilson and the next morning when I got to class everything was ok.  She extended some grace and I believe I learned a lesson about rescue and redemption.  It was a lesson that I would see played out over the years for the rest of my life…not by a teacher or my Momma—but by my Dearest Daddy.

You see, God is in the rescue and redemption business. Did you know that?  He is always looking for a lost cause to redeem and rescue and that’s all of us since we all have messed up. And the amazing part, He never grows tired of it.  I think it must be His incredible love for us. When I decided to become a Jesus follower, I didn’t become perfect…no one does. I still managed to “forget my homework”…again and again.  But each time He was there with a bucket full of grace and love. That’s just what He does.  Oh, and I don’t ever have to chase after Him for He is always chasing me.

So, today, if your day or your life is going south like a fast freight train, just remember this.  There is a God, He does love you and He wants to redeem and rescue you.  He’s chasing you to do exactly that.  No matter what it is, just know and believe, “He’s got this.” Bro. Dewayne