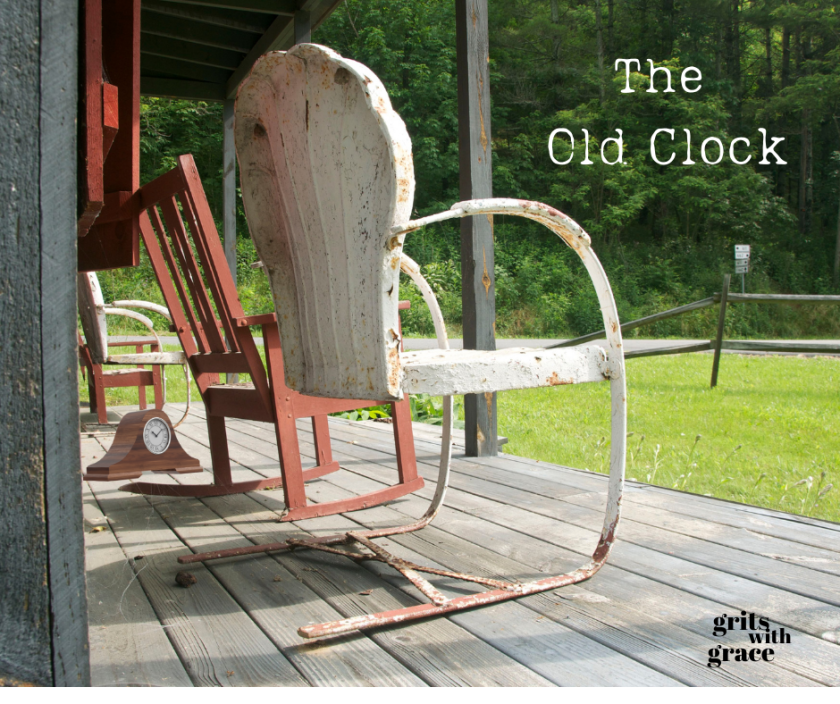 And they heard the sound of the Lord God walking in the garden in the cool of the day.” Genesis 3:8

I have a clock.  Well, the truth of the matter I have lots of clocks.  Throughout my adult life, starting in about 1978, I have had this love affair with things that go, “tick-tock.” Then, somewhere along the way, I even began to love clocks that didn’t.  That doesn’t mean they were broken it just means they were electric.  One of the things that I love about clocks is their tenacity—like the Energizer Bunny—they just keep going.  I have some “tick-tock” clocks that are well over a hundred years old, and they are still ticking and still tocking. Something that is almost equally impressive as that are some of the electric clocks that are almost that old and they are still humming along.

And that brings up the clock.  About thirty years ago, I was at a friend’s antique shop on a Sunday afternoon.  I had been there many times before.  As I browsed around, I came across a camel back electric mantle clock.  I instantly recognized it…not because I had seen it before, but one like it.  It was a General Electric, Model 414, Westminster Chiming clock.  The reason I knew it so well was because my grandfather and grandmother had one like it and every time I went to their house, I listened to the song of that clock.  And this clock sounded just like it because—it was.

The song transported me back in time…to a different era when life was slower and to some extent easier.  Well, the clock in the antique shop that day found a new home.  It went first to 319 E. Poplar Street in Cobden and followed me to 217 W. Poplar Street in Harrisburg.  For the last 35 years or so, it has filled the place where it sat with song.  I loved it. Well, about two months ago, I heard sometime and realized it was coming from my beloved friend.

A very distinct noise, more than a hum but less than a grind, was coming from the clock.  The long and short of it is the old motor, after more than sixty years, was showing signs of death.  When the noise started, I immediately did some research and landed at a site of a man who works on this kind of motor…a Telechron.  I told him what my songbird was doing, and the prognosis was grime.  He said the noise meant that the motor was nearing the end of its life and the only answer was to replace the motor.

Well since the clock was still working and because the rebuilt motor was far from inexpensive, I decided to try and live with the clock…noise or not.  But I need to be honest and let you know it is not going well.  Now instead of hearing and loving the beloved song, all I can hear is the sounds of a motor dying…getting louder by the day.  And the problem is the sound of death has drowned out the song of life.  Oh, the dear old clock is still singing its song but for some reason all I can hear is the noise it is making…not the song it is singing.

Somehow, almost unintentionally, I have decided to listen to the noise and not the song.  While the noise is louder it is not louder than the latter.  The noise only wins the day because I choose to listen to it.  Try as I may, when I walk into the room, the first thing I hear is death and not life.  I wonder, no I know, that this happens in our lives.  In a world filled with wonder and life, if we are not careful, we only hear a world heading south. Instead of hearing a baby’s first cry or a robin’s spring song, we choose to listen to brokenness, loss, and death.

I know I have a choice with the old clock, I am just struggling to choose wisely.  It must have been that way for Adam and Eve when God came to the garden each day to visit.  Genesis, the first book in the Old Testament part of the Bible, says that they would hear God walking in the garden in the cool of the day.  It was a sound they used to run to but now it caused them to run away.  Sin, their sin, had gotten in the way.  If you find yourself running from what you used to run to, maybe just maybe, something has gotten in the way. Perhaps you are hearing the noise of dying instead of the song of living.

The answer for the old clock is a new motor and the answer for us is new heart or maybe a new or adjusted perspective.  If you’ve not discovered the joy of believing in God, check Him out.  You will find a song you’re sure to like.  For some of us, it might be an adjustment in our hearing, choosing to hear the song and not the noise.  Regardless, we have one confident assurance…He loves us and cares for us and no matter what, “He’s got this.” Bro. Dewayne