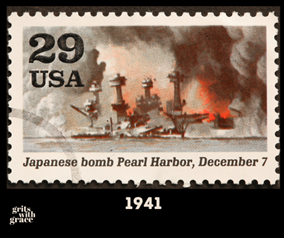 If a house is divided against itself, that house cannot stand.” Mark 3:25

“December 7th.  A day that will live in infinity.” Though it was before my time I know the story well. It was a beautiful morning in Pearl Harbor.  Those who weren’t painting the ships or swabbing the decks of the powerful U.S. Navy Pacific Fleet were home enjoying a round of golf or a tropical breakfast.  And then, at 7:55 in the morning local time, without warning or provocation, bombers, fighters and torpedo bombers of the Imperial Japanese Navy swept in.  They began to systematically destroy the American fleet and its supporting aircraft.  That morning thousands of sailors and civilians lost their lives and thousands more were wounded.  Over eleven hundred sailors died instantly when a single bomb hit the ammunition magazine on the battleship Arizona.

In an  hour and fifteen minutes the attack was over and the United States was drawn into a global war.  The nation had long been divided over what role the United States should take in the war that raged in Europe.  That was all settled when, after the attack, Japan declared war on America and Hitler as an ally of Japan did the same.  Like it or not, the United States was embroiled in a war that would last for almost four years and cost the lives of 407,316 Americans with another 671,278 wounded.  But by the grace of Almighty God, in the end, America and her Allies were victorious in defeating the tyranny of the fascist governments.

Thirty-eight percent of those who served were volunteers and sixty-one percent were drafted.  The average enlisted person was paid $71.00 per month while the average officer was paid $203.  Drafted or volunteer, officer or enlisted, they were all willing to put their lives on the line for the cause of freedom and the cause of defeating countries bent on oppressing those weaker than they.  Many valuable lessons were learned during that time—lessons that we must not forget.

First, is the power of unity.  Before the Pearl Harbor attack the nation was clearly divided over the war.  After the attack, the nation pulled together on a unified front to protect and defend—first the United States, and second, the millions of innocent people being oppressed by Germany, Japan, and Italy.  It is tragic that it took a Pearl Harbor to bring the nation together but if America had entered the war divided, the outcome would have been much different.  Today, we need to understand that it is time to come together again. Jesus said that a house divided against itself cannot stand.  Neither can families.  Neither can churches.  We must come together, or we will fall together.

Second, is the power of owning it.  As in any national tragedy, the event happens and almost immediately the finger pointing begins.  Pick the historical event and the pattern is sadly the name.  Political parties and even ordinary, everyday people will use a tragedy to promote their cause.  We have seen it on the national front.  We have seen it on the local front.  We have seen it in the churches.  It is not a time to point fingers, but rather a time to rise to help solve what is broken.  Eighty-one years ago today, December 7, America rose to the challenge.  I wonder if we will have the wisdom to do the same today.

Last, is the power of wisdom.  There is not much debate that storm clouds were gathering in the days leading up to December 7th.  Some would say that there was blatant evidence that an attack was coming.  Sadly, those warning signs were largely ignored, and the cost was horrendous.  Today, right now, there is something we need to remember.  There is one enemy, and it is not our neighbor, not our brother or sister in church, and not even the person who belongs to another political party.  The enemy is Satan, who wants nothing more than to destroy us. Jesus said, “The thief comes to steal, kill and destroy.”  It was true when He said it…it is true today.  The second part of that verse is filled with hope. Jesus said, “I have come that you might have life and have it more abundantly.”

You see, God is for us.  He is very aware of Satan’s tricks and schemes, and He wants us to be victorious over him.  That is what Christmas and Easter were all about.  God became flesh and lived among us and then ultimately and deliberately died on a Roman cross that all people, regardless of nationality, race, or economic station, could be forgiven and have eternal life.  With the wisdom of God, we don’t have to have a “spiritual” Pearl Harbor. With God’s help we can come together.  With God’s help we can be victorious.

You see, it’s not about religion.  It is about a relationship with the God who made it all. And with the relationship comes hope, comes peace, comes forgiveness, comes unity.  If we are wise enough to believe what God says, and act on what He teaches, our best days won’t be in the rearview mirror but rather ahead.  So, this Christmas season, let the Prince of Peace bring His peace into your world.  Rest in Him.  He’s got this.  Bro. Dewayne.